The GAW Newsletter is circulated to members four times a year, containing:

Gazebo is GAW’s in-house magazine. The first issue, in 1999, was devoted to short stories. Since then poetry, extracts from novels, reviews (of books, films and theatre) and articles have also featured. There was a women’s short story issue (2001) and a poetry issue (2014). In format we are still A5 and stapled, but have gone from 34 pages to 44. We now aim to bring out two issues a year. Currently we are up to issue 19, December 2015.

A copy of Gazebo is sent to each GAW member. It is not for general distribution and does not have an ISBN. However extra copies are produced and can be purchased by contributors for £1.

All back copies of Gazebo are stored electronically and it is hoped the paper copies will soon be housed in the Bishopsgate Institute, along with other GAW and Paradise Press manuscripts and publications. 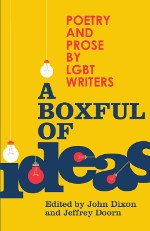 A Boxful of Ideas is our latest anthology of 40 short pieces by GAW members, including fiction, non-fiction and poetry. Full information, and how to order copies, on its page on the Paradise Press website (and technical details on our Advance Information Sheet – pdf format).

Other anthologies now available include:

All these are published by Paradise Press, and can be ordered from the Paradise Press website. Our earlier anthologies, Gawp and Gaze and Slivers of Silver, can sometimes be found second-hand on the web.